British cross-country racer Luke Smith left locals red-faced when he won a road race during a trip to – on his Whyte 19 mountain bike.

When Luke lined up at the start of the 75km Broadhurst Road Race in on his hardtail with knobbly tyres he was sneered at by some of the regulars. But he soon broke away with the main bunch and then dropped them all in a sprint finish.

Here’s what the Whyte-sponsored racer had to say:

“Due to the fact that I didn’t really know what riding would be on offer in , I only travelled over here with my Whyte 19. During my stay I have trained a fair amount on local roads (so as not to get lost in the bush!). However, when the opportunity came up to compete in a road race here in I was a bit sceptical about the potential. My chances of hanging in for the 75km distance were also made worse by the fact that I only had my off-road tyres!

“Don’t get me wrong, the Whyte 19 is a very responsive frame, but when guys started pulling up on full-carbon road bikes with Zipp 808 deep-section carbon wheels, I anticipated it would be a matter of kilometres before I got dropped!

“The race started off a fairly decent pace with everyone keen to establish a good spot near the front of the peloton. I managed to work my way up front without too much difficulty, much to the surprise of many competitors as I rode past, my big knobbly tyres buzzing as the pace was wound up.

“There were a couple of guys whom some friends of mine had told me to watch – one of them is apparently a pro roadie in . It was no surprise that it was these guys who made most of the attacks. What was surprising was the fact that I was able to go with them! Each time, however, we were pulled back by the main group.

"As the race neared the finish some of the riders made a last-ditch effort at getting away but it was destined to come down to a sprint finish. I managed to constantly hold second wheel behind the lead rider with the pro road rider sat closely on my wheel. As we hit the finishing straight I launched my attack and as I glanced back I realised I had quickly gapped the riders. I even had enough time to make the most of the win and celebrate in style.

"The crowd and other riders were shocked that a mountain bike had won a road race, especially as I was on knobbly tyres. When they later asked what was the secret, I replied Whyte – Great British mountain bikes, they can't be beaten! To be honest though, I had really surprised myself." 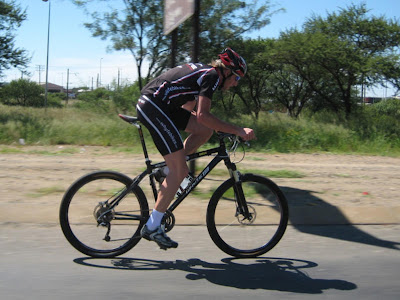